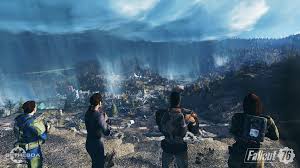 Bethesda has outlined a number of changes that will follow Fallout 76’s launch as a result of feedback garnered from the recent beta.

Chief among the biggest changes will be an increase in stash size, which will rise from a weight limit of 400 to an unspecified amount. In addition, various issues will also be ironed out, and 21:9 Ultra-Wide aspect ratio will be added into the mix.

‘We’d like to extend our sincerest thanks to everyone who played the Fallout 76 B.E.T.A.,’ Bethesda posted on Reddit. ‘The stories you’ve been sharing, the feedback you’ve provided, and the issues you’ve made us aware of have been appreciated along this journey.’

The final round of the Fallout 76 beta is taking place today, with the full game releasing on PlayStation 4, PC, and Xbox One on November 14.

The game marks the first online-only title in the franchise to date, with players exploring a sprawling post-apocalyptic wasteland some 25 years after the earth was devastated by a nuclear war.